Golden State's 2015-2016 season has been nothing short of impressive. Steph Curry makes the highlight reel almost every night the team takes the court. Klay Thompson's scoring ability and athleticism put him not far behind (although certainly behind) Curry. The rest of the Warriors obviously have a set of skills, talent, and cohesion (kudos to Steve Kerr) that the league rarely sees. In fact, not since 1996 has the NBA had a team with 70+ wins The 1996 Bulls were the only other team to ever hit that mark with 72 wins.

Well, after an impressive win against the San Antonio Spurs on Sunday (the Spurs only home loss of the season) the Warriors have a good chance on Wednesday night against the Memphis Grizzlies of setting themselves apart as the only team to ever win 73 games in a season. Where does that put them among the best teams that have taken the court in the NBA?

Despite their documented success, much of the sports world still wonders how good this team really is. Maybe it's the relative simplicity of Curry's game, his lack of fanfare and natural athleticism compared to the likes of Michael Jordan. Maybe it's the simple way the Warriors have handled their opponents this seasons. Not too much swagger. A shortage of miracle plays and dunks from the free-throw line?  A poll taken on ESPN in the past week resulted in a vote of 70% to 30% in favor of the 1996 Bulls beating this year's Warriors in a 7-game series. While the poll is obviously not scientific, with as decisive a margin as that is, apparently Curry and his team aren't being given the respect that their numbers seem like they should warrant. In fact, earlier this season, Charles Barkley assertively stated that this year's Warriors wouldn't stand a chance against the 1996 Bulls. 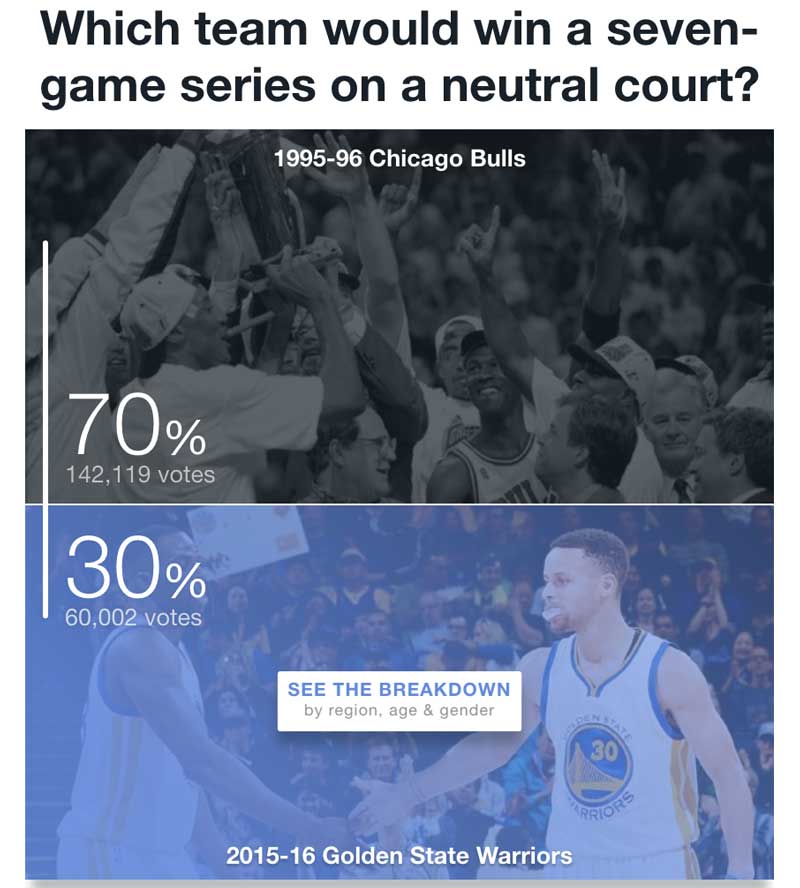 The criticism of this year's Warriors achievements even led Rachel Nichols of ESPN to go on a rant recently, criticizing the haters for their unwarranted dismissal of all the evidence in favor of the Warriors' unprecedented dominance.

Towards the end of this season, over the past two weeks, there have been some "struggles" for this, at times earlier in the season, almost invincible Warriors team. A home loss to the Celtics, their first and of the season, followed up by another home loss (a meltdown that included giving up a 17-point lead) to the lowly Timberwolves, made the 73 win mark quickly become just a fading opportunity. However, the Warriors have since showed that they are resilient, and that in so many ways, they control their own fate. A win over the Grizzlies, a team that has

The Best Basketball Team Ever?

Based strictly on statistics, including and especially number of wins, if the Warriors can finish off and get #73 on Wednesday night, then go on to win their second straight NBA championship, it would be hard to argue that they don't deserve a legitimate nomination as the best team in NBA history. While old schoolers like Charles Barkley, Oscar Robertson, and Chicago Bulls fan boys seem to find unlimited reasons why the Warriors don't compare to the previous wins record holder, and while we'll never know for sure how the two teams would fare against each other, it's hard to make the case that there has ever been a better team than the current Golden State Warriors.  Today's basketball climate, with its draw from mature international programs and more developed coaching and training in the US, isn't the most competitive it's ever been. Thriving at the highest level of the 21st century basketball economy and notching 73 wins is good enough for me to crown the Warriors.